The Barkan Method Hot Yoga Posture of the week! 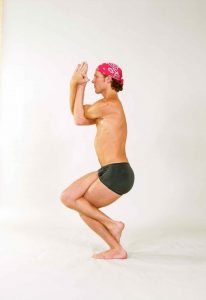 Beginners: Many students with tight shoulders, men especially, have trouble getting their hands together properly. Don’t muscle it, but rather relax and soften your arms and shoulders and try hooking your elbows. Turn your thumbs toward your face and with the      your hands closer together; don’t forget to open the fingers and flatten the palms before you bring your leg over. Until you’re able to hook the foot around the calf, balance with your upper leg as high on the thigh as possible pointing the upper knee (assuming we’re on the right side) to the left which will allow the foot to eventually hook around the calf.   Be patient, my hips were so tight it took me a year before I could get my foot around. At first, bend the upper body forward. This softens the hips and allows you to sit down (six inches). Once you’re sitting down, without coming back up, bring your upper body back.

Intermediate: Now that you’re able to hook your foot around the calf, close off the space between the ankles and knees by pressing the top of your right foot (we’re still on the right side) against the back of the left calf and lowering the right big toe toward the floor. Then turn the right knee back toward the center so it lines up under the elbows. As you turn the knee to the right, shift your upper body to the left (it’s a very subtle move creating an opposite direction, so keep your upper body vertical). Make sure your palms are together (this is half of the pose), opening the wrists, elbows and shoulders. When checking your alignment in the mirror, square your hips and shoulders; it’s easier to bring the lower hip up and the higher shoulder down. And remember “upper body back”!

Advanced: The key word here is isolation! I talked about isolation in previous newsletters. In the eagle, the isolation is to relax and soften the hips but squeeze the legs together tight. Hands are flat together but the shoulders are relaxed. It’s hard to do; if you’re not able to isolate these separate feelings in the body, at least try to visualize it, and soon it will be a physical reality. Many advanced students sit down too low! If you’re down too low you will compress your upper body into the waist and hips. Instead, flatten your lower abdominal muscles and lift up and out of the waist. The final advanced pose is a straight spine from the tailbone to the top of the neck, and if you’re too low you’ll never assume this straight spine position. Your hips should be approximately three inches above your knees. Last but not least; once your spine is straight do not arch your back (arching the back is a modification). Tuck your hips into a neutral position, very similar to the first part of the Awkward Pose (Utkatasana). The eagle is a warm-up posture. It opens the body from the source, releasing the tendons and joints, which allow the muscles to stretch even deeper!