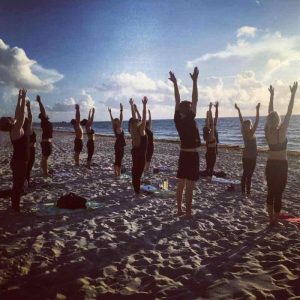 The first people to intuit the teachings of Yoga, six thousand years ago, were the tribal leaders, the Shamans! They saw people suffering and realized the people were under the illusion they were separate beings. Separate from each other, separate from the universe and separate from God. So they intuited the techniques of Yoga to shatter this illusion. The Ancient Rishis or Seers, choose the word Yoga, which means to yoke, to bind, to connect man to the universe and to God (or whatever God means to the individual). One of my favorite Yogananda quotes: “Talk to God in the language of your own heart”.

Yoga teachers, including myself, can sometimes place so much attention on perfecting Asana and forget the Bigger Picture; Originally Yoga was about easing the suffering, connecting people, helping find peace of mind and peace of God. Another favorite Yogananda quote; You can measure your spiritual progress by how much peace of mind you are experiencing.”

The Chinese have a saying: “It’s like the finger pointing to the moon. Don’t concentrate on the finger or you’ll miss all that heavenly glory”!! Technique and alignment are essential but it’s the experience that counts. Using Yoga to enhance all areas and aspects of our lives, to connect us to the world, the universe and everyone in it, that to me is The Bigger Picture!